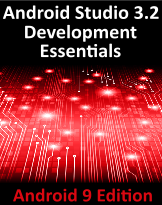 Fully updated for Android Studio 3.2, Android 9, Android Jetpack and the modern architectural guidelines and components, the goal of this book is to teach the skills necessary to develop Android-based applications using the Java programming language.

Other key features of Android Studio 3.2 and Android 9 are also covered in detail including the Layout Editor, the ConstraintLayout and ConstraintSet classes, constraint chains and barriers, direct reply notifications and multi-window support.